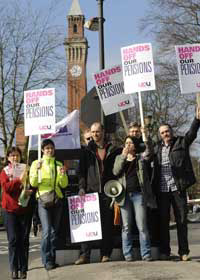 As students of the University of Birmingham we are writing this to try and persuade staff vote yes in the UCU’s ballot for strike action, open at the moment with ballots in by the 11th of February [1]. Being in support of a strike, and the disruption it will cause, is not a decision we take lightly. However in the context of what the management are doing at this university we believe that it is necessary.

The view of almost all students and that of the Guild is firmly against course closures. We recognize that universities should be made up of diverse and varied subject areas and that we should not be cutting departments that have taken decades to create on the basis of short term fluctuations in funding. The restructuring that has taken place this year in the IAA and Sociology is not the first to happen at the University of Birmingham and unless we organize effectively it will not be the last. We need to be showing that attempts to harm the interests of staff and students in this way will face serious resistance. Recognizing this a recent motion to the Guild’s council (made up of elected students from across the university)stating that “The Guild will support staff strikes unless otherwise instructed by Guild Council”, passed unanimously.

Restructuring is only the most visible and damaging face of a general reduction in the proportion of the university’s income it spends on staff. In the last ten years this proportion has dropped from 58.8% to 52.5%. This is equivalent to £29.3 million more being spent on staff (equivalent to 1051 grade 7 academics) if the proportional spend had been maintained over this period [2]. This has led to a situation where the University’s staff student ratio is 21st out of 24 in the Russell Group and 249th internationally [3]. The university have shown no signs of trying to rectify this problem, but rather are seeking to make more staff redundant, and more alienated and likely to leave.

Senior university management conduct themselves in a way that completely ignores any staff or student opinion.  They treat us as cogs in their machine rather than the people who do the real work that keeps the university going. When the University wanted to restructure the IAA students felt as if the University management had decided what they were going to do in advance and then used every method they could to try and force those changes through. The consultation was held over the summer so that students had no opportunity to participate; while key members of staff were given promotions to ensure support for the plans inside the department.

We need to show the university managers that contrary to their illusions of power, it is ordinary staff and students who recruit new applicants to the university; who do all the learning teaching and research; and produce the graduates who leave the university and find employment. The management have repeatedly shown complete intransigence to very reasonable and basic demands and unfortunately it has become necessary to take further action. Students feel that we should not remain divided from staff or stand back and watch,  but should make our views known to staff on a strike that we believe to be necessary.

If academic staff are not in the UCU we would encourage you to join and help them try to protect the quality and breadth of education at Birmingham University (if you are not an academic staff member then the same goes for Unison).